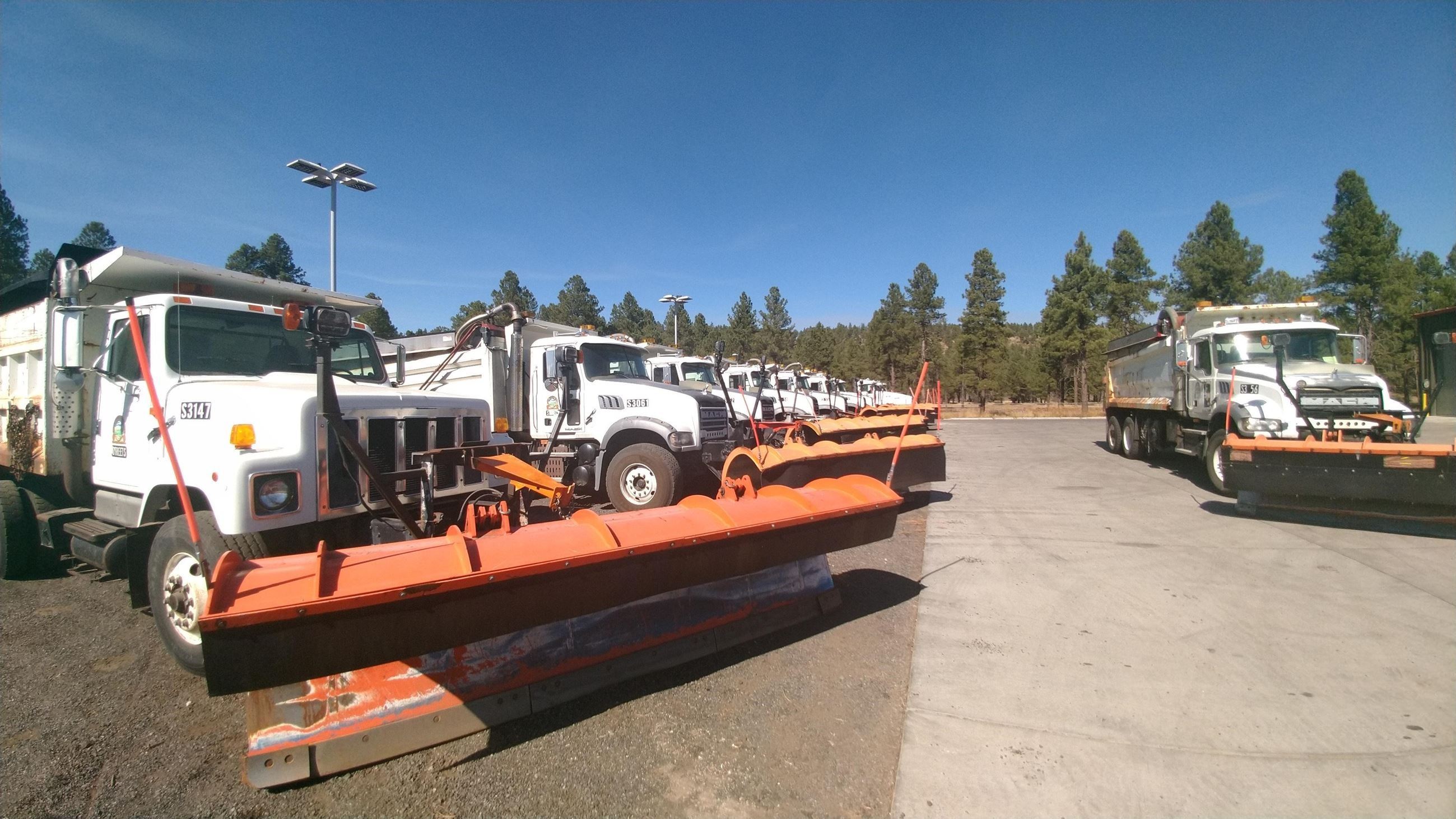 Snow Operations for the winter season

City crews will apply cinders as a traction aide to icy roadways. The City of Flagstaff does not currently use chemical deicing agents.


Snow packed and icy roads create challenging driving conditions. The use of snow chains or studded tires may be advisable. NAIPTA and FUSD bus routes on main arterials and major collectors may be impacted due to icy conditions.

Cinders are applied to major hills, signalized intersections, railroad crossings, shaded areas, problem areas, and stop signed intersections. We limit the use of cinders in residential areas and flat roads.
Cinders must be reapplied frequently due to traffic pushing the cinders into the snow/ice, crushing, or blowing off the roadway.


The Flagstaff City Council approved a snow operations policy which sets priorities for plowing as well as some desired time frames. This policy includes a goal to keep first priority streets open at all times.

All other streets are considered Second Priority Areas.


Route maps depicting First Priority Areas and areas not maintained by the City are available at the Snow Operations - Snow Routes by Maintenance Agencies webpage.

The policy also sets the following target plowing time frames based on the amount of snowfall received:

During the months of January and February only.

Snow operations crews operate on 12 hour shifts and work around the clock plowing, cindering, and picking up snow during and after a storm.

Currently there are 700 lane miles, 16 miles of alleys, 131 miles of bike lane, 270 miles of sidewalk, 55 miles of FUTS, and 27,000 driveways in the city. The Streets Section is responsible for approximately 700 lane miles of streets, varying in width from two (2) to nine (9) lanes. Equipment makes multiple passes to completely plow all snow from these lanes. This results in over 2,600 miles traveled by city equipment in order to plow all city streets one (1) time.

In addition to snow plowing, the Streets Section applies abrasives (cinders) to assist motorists with traction control in critical locations and when conditions require treatment.

During all weather events, there are three (3) critical considerations for the Streets Section: Timing, Texture (Precipitation Type), and Temperature.

The timing of snow storms can create challenges. If the City receives snow right before the morning or evening rush hours, it can be difficult to keep first priority routes open/passable. Depending upon the amount of accumulation, approximately 4-12 hours are required to plow and cinder the first priority streets one (1) time. Time is the most important element in providing efficient and safe snow operations. 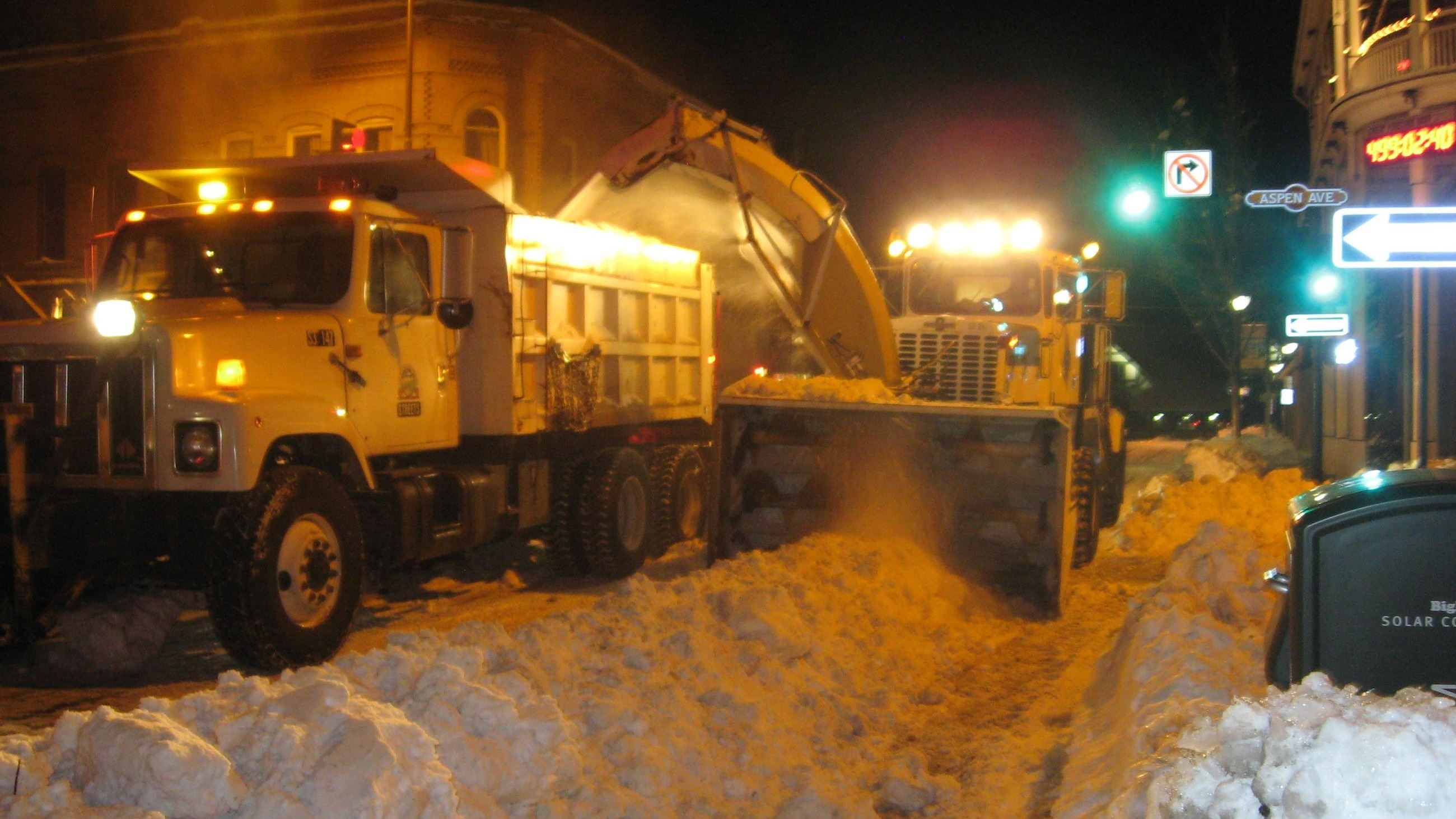 Information for Cyclists and Pedestrians


During winter storm events, the Streets Section provides ice monitoring and periodic application of abrasives (cinders) to bridges, major hills, intersections, railroad crossings, shaded locations, and other problem areas. After storm events, the Streets Section continues to provide community sweeping and clean-up efforts to help clear abrasives from the roadways with emphasis on bike lanes and intersections.
Streets and bike lanes are plowed, cindered, and swept based on their location in the City. First priority areas consist of Main Arterials, Major Hills, Downtown, Mountain Line Transit Routes, and School Bus Routes. All other streets are considered second priority areas (residential streets and cul-de-sacs). After first priority routes have been plowed, cindered, or swept, secondary routes are addressed by our Snow Operations crews. Secondary routes are not plowed until first priorities are completed and more than four (4) inches of snow have accumulated on residential roadways.
The Streets section understands the importance of providing safe cycling opportunities, when feasible. Bicycle lanes are addressed as time allows as vehicle lanes are initially cleared during winter storm events. Please be advised that streets may require several runs from plows and sweepers to completely clear the roadways of snow, ice, or cinders due to the timing/severity of a storm. Cyclists are asked to remain alert while commuting in the City of Flagstaff during the winter season, to allow extra time for travel, and to consider alternate transportation routes if necessary. Cyclists are encouraged to consider utilizing vehicle lanes if necessary to avoid minor ice or cinder build-up in the bike lanes as our department continues to monitor and mitigate impacts from storm events to roadways. If vehicle lanes cannot safely be utilized, cyclists may consider standing up on bicycle pedals as hazards are navigated for better control.

Additional resources for cyclists are available at the Bicycle Program and Bicycle Safety Tips webpages.
Transportation options for commuting in Flagstaff are provided in the Area Resources section below.

For the safety of pedestrians, property owners and occupants are responsible for keeping sidewalks adjacent to their property clear of snow, ice, or other obstructions no later than 24 hours after the accumulation (City Code 8-03-001-0004 – Removal of Snow or Ice). Additional information is provided in the Clearing Sidewalks section below.
The City advises pedestrians to remain alert while walking during/after winter storm events by walking slowly in areas that appear icy and wearing appropriate footwear that provides traction assistance.

Additional resources for pedestrians are available at the Pedestrian Program webpage.

Transportation options for commuting in Flagstaff are provided in the Area Resources section below.


7. Seasonal Parking Restriction: No person shall park, or permit to be parked, on any street between midnight and 7:00 a.m., from November 1st to April 1st, any vehicle owned or controlled by that person.

(1)    The seasonal parking restriction does not apply to the following areas:

(b)    Both sides of Pine Cliff Drive for a distance of nine hundred (900) feet south of the south curb line of Ponderosa Parkway.

(c)    Both sides of Locust Street (formerly Cottonwood Street) for a distance of three hundred fifty (350) feet south of the south curb line of Ponderosa Parkway.

(d)    All public streets in the Aspen Place at the Sawmill development.

(a)    Both sides of Leroux Street from Benton Avenue to Phoenix Avenue, and from Route 66 to Cherry Avenue.

(b)    Both sides of Benton Avenue, Cottage Avenue, and Phoenix Avenue from Leroux Street to Agassiz Street.

(c)    Both sides of Aspen Avenue from Beaver Street to Agassiz Street.

(d)    Both sides of Birch Avenue and Cherry Avenue from Beaver Street to San Francisco Street.

(e)    The north side of Route 66 from Beaver Street to Agassiz Street.

(f)    Both sides of Agassiz Street from Route 66 to Birch Avenue. 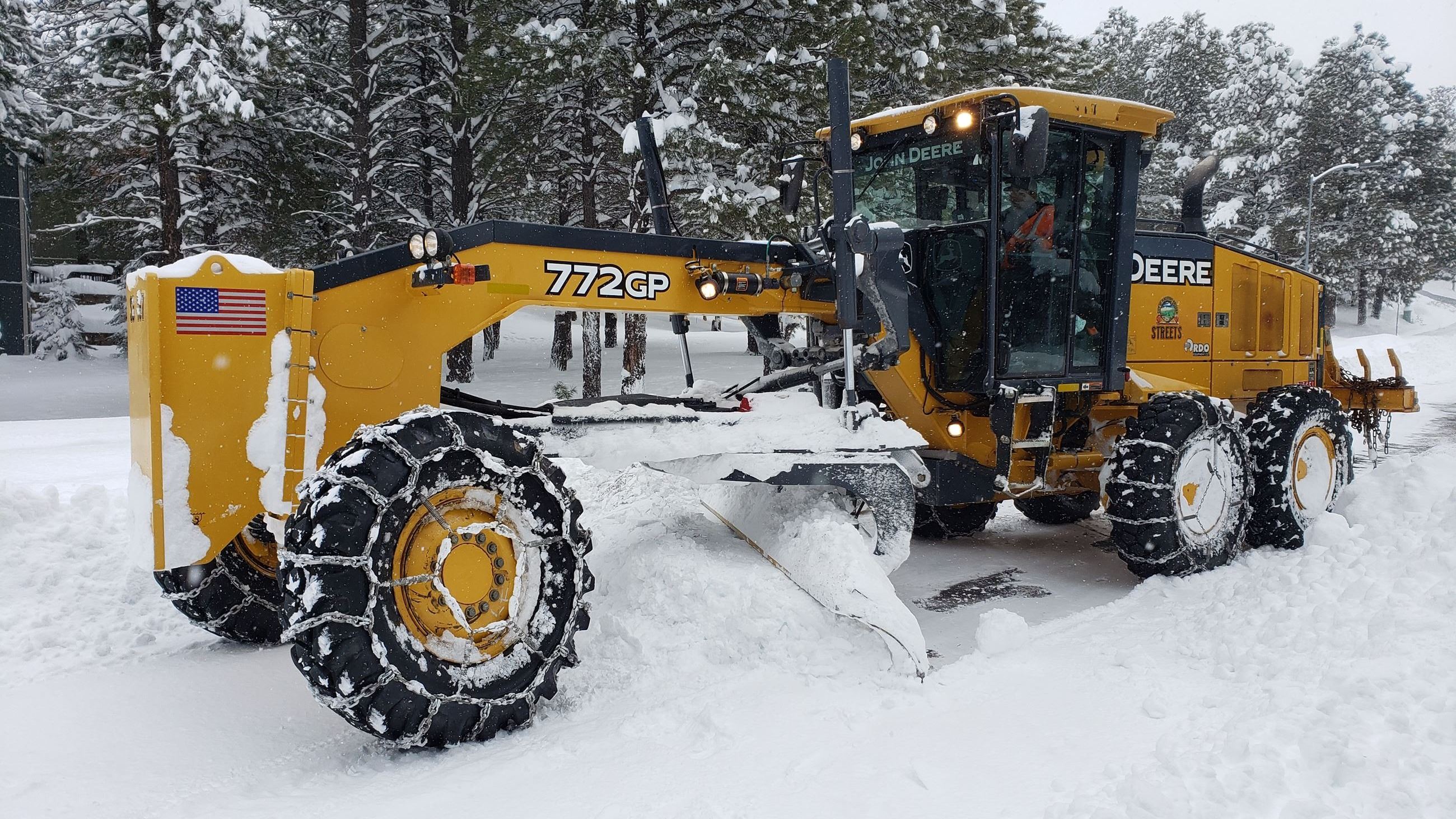 
Property owners and occupants are responsible for keeping the sidewalks adjacent to their property free and clear of any accumulation of snow, ice, or other obstruction; in any event no later than 24 hours after the accumulation. The ordinance also prohibits moving snow or ice onto city streets or alleys. Shoveling snow onto streets after plowing compounds ice buildup. Changes in the Safe Sidewalk Ordinance include owners/occupants being served a Notice of Violation one (1) time per season with unsafe sidewalks being abated at their cost.


Please be considerate of your customers/neighbors...clear off your sidewalk following a snowstorm, deposit of snow or ice from street clearing efforts or other accumulations.

Tips For A Safe Winter Season:

If you have questions about snow operations in the City of Flagstaff call the Public Works Office at  (928) 213-2100 during normal business hours.

The Citizen Request Tracker is a tool that can be used to report your concerns to the city. It can be used for reporting non-emergency concerns related to snow events. Please note that these forms should not be used for issues that require a real-time response.

**During snow events, the department receives high volumes of phone calls and reports. All reports from citizens will be reviewed and addressed in order of priority as scheduling allows.** 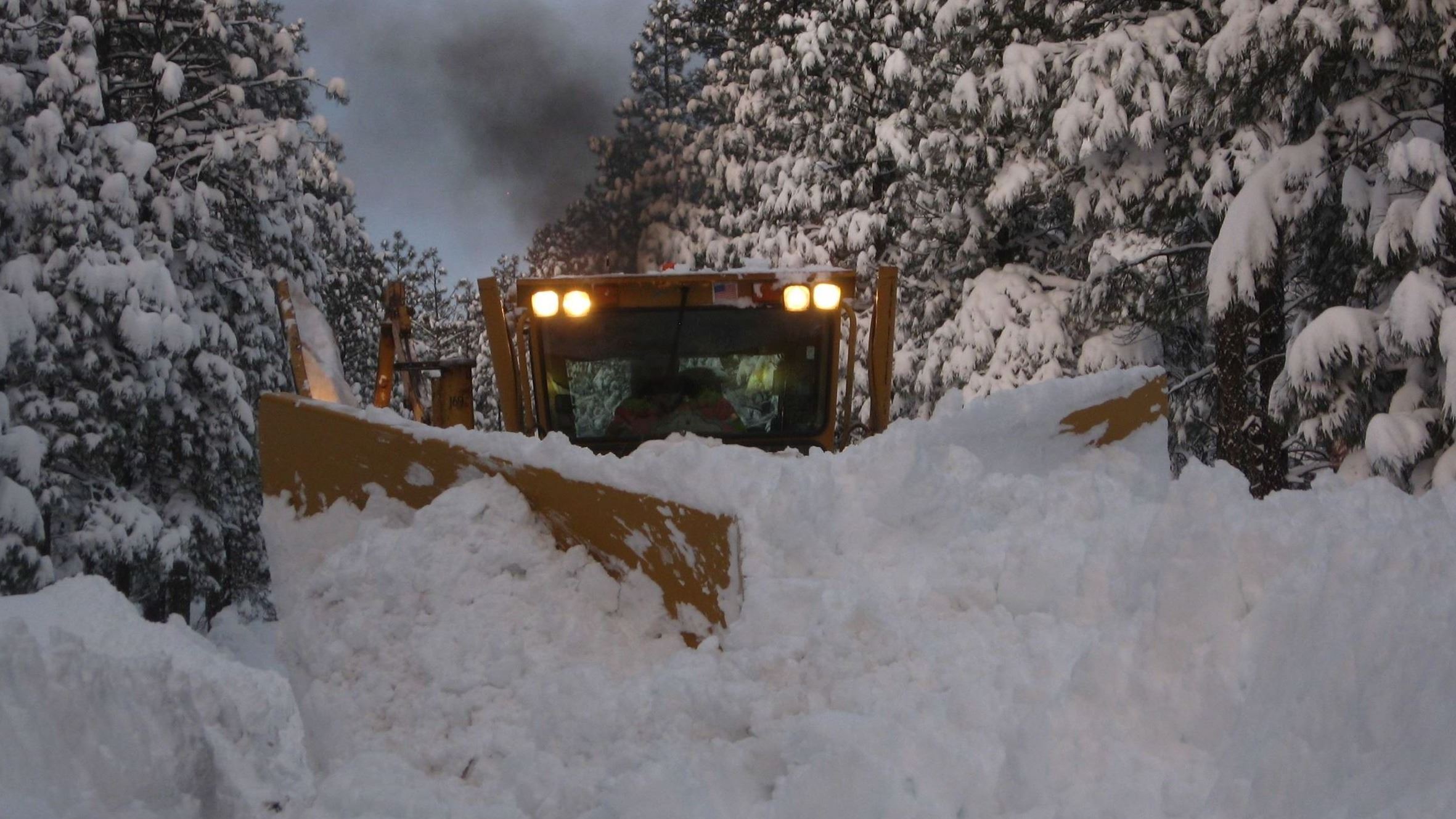